Click for Dave Toschi interview
​Here is a list of envelopes processed for DNA, minus the envelopes from July 31st 1969, as they had been misplaced at the time this list was compiled. It can be noticed that the 1978 'I am back with you' letter has yielded DNA material, but is attributed as not being an authentic Zodiac letter. Since authorities now claim to have a DNA profile from the 1978 letter (having stated this in the list}, it is fairly certain this is the reason they have effectively ruled out this letter - but one has to ask, how they can rule it out unless they already have a full DNA fingerprint of Zodiac to compare it to. A partial DNA fingerprint from earlier confirmed Zodiac correspondence could not be used to rule out the 1978 letter. When the 2002 TV exclusive with Cydne Holt of the San Francisco DNA laboratory compared the full DNA profile of three touted suspects to what they claimed was a partial DNA profile from confirmed Zodiac letters, this partial DNA profile would only have been good enough to rule suspects out (which they did during the show), but it isn't sufficient to definitively identify a suspect as Zodiac. For that you need a more comprehensive DNA profile. It boils down to the numbers of matching loci on a DNA strand.

The bulk of identifications using CODIS rely on short tandem repeats (STRs) that are scattered throughout the human genome and on statistics that are used to calculate the rarity of that specific profile in the population. STRs are a type of copy-number variation and comprise a sequence of nucleotide base pairs that is repeated over and over again. At each location tested during DNA analysis, also known as a locus (plural loci), a person has two sets of repeats, one from the father and one from the mother. Each set is measured and the number of repeat copies is recorded. If both strands, inherited from the parents, contain the same number of repeats at that locus the person is said to be homozygous at that locus. If the repeat numbers differ they are said to be heterozygous. Every possible difference at a locus is an allele. This repeat determination is performed across a number of loci and the repeat values is the DNA profile that is uploaded to CODIS. As of January 1, 2017, requirements for upload to national level for known offender profiles is 20 loci. Alternatively, CODIS allows for the upload of mitochondrial DNA (mtDNA) information into the missing persons indexes. Since mtDNA is passed down from mother to offspring it can be used to link remains to still living relatives who have the same mtDNA. Prior to January 1, 2017, the national level of CODIS required that known offender profiles have a set of 13 loci called the "CODIS core". Since then, the requirement has expanded to include seven additional loci. Partial profiles are also allowed in CODIS in separate indexes and are common in crime scene samples that are degraded or are mixtures of multiple individuals. Upload of these profiles to the national level of CODIS requires at least eight of the core loci to be present as well as a profile rarity of 1 in 10 million (calculated using population statistics).

What is apparent in the DNA chart, is the evidence of "few cells" in the widely accepted Zodiac letters up to the Kathleen Johns letter on July 24th 1970, after which there is an evident departure to "cells found" on the Kathleen Johns, Little List, Exorcist and 1978 letter. The Halloween Card, Los Angeles letter, Pines Card, Monticello Card, Citizen Card, Red Phantom letter and 13 Hole Postcard seem to have no attribution in comments. Admittedly many of these are postcards, hence may not have been tested or attributed on this list due to the absence of an envelope, but what we are left with, is that subsequent to the June 26th 1970 Button letter, biological material discovered on the communications appears more prevalent. It is therefore conceivable that if the Zodiac Killer avoided licking his stamps and envelopes, the Button letter may have been Zodiac's last authentic correspondence, unless he willfully attached himself to the Cheri Jo Bates murder by sending the Los Angeles letter on March 13th 1971.

Some people believed and still do, that the prime Zodiac suspect Arthur Leigh Allen to be responsible for the 1978 Letter based upon the fact that during the four years between this communication and the previous Exorcist Letter, he had been serving time in a psychiatric facility in San Luis Obispo County. On September 27th 1974 Allen was arrested by the Sanoma County Sheriff's Department for child molestation, involving a young boy and sentenced on March 14th 1975, but after his release from the Atascadero State Hospital on August 31st 1977, the 1978 declaration of "I am back with you" appeared to be marking his return to public notoriety.
Fingerprinting, and in later years DNA, seemingly ruled out Allen as a suspect in the Zodiac case, although suspicions still linger to this day. The San Francisco Police Department compared a DNA sample taken from Arthur Leigh Allen shortly after his death in 1992, that ultimately provided no match to a sample recovered from the 1978 envelope.
FBI files, Zodiac 5, page 50/249
http://www.zodiacciphers.com/uploads/4/9/7/1/4971630/zodiac5_pages_1-249.pdf​ 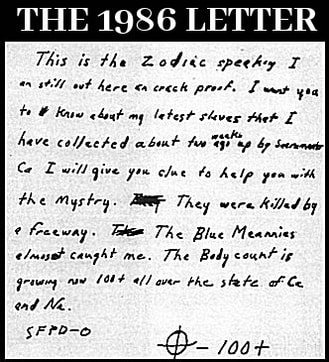 Click to enlarge
On the left is another purported Zodiac correspondence entitled The 1986 letter.. Below I have discovered the only crime mentioned by the letter that matches the date, location, number of victims - and more importantly - a crime that exhibited many of the traits of the Lake Herman Road and Blue Rock Springs attacks. ​The date was Tuesday April 22nd 1986, when Laotian couple Koy Ien Saechao (48) and Choy Fow Saelee (40) were traveling back on the two and a half journey to their residence in Dorman Road, Yuba City after visiting their son in a Merced CA hospital, situated in the area of the San Joaquin Valley of Northern California. They were only 45 minutes from home when it was believed they had opted to take a rest on the roadside edge (or ushered over by a second vehicle), near the interchange of Highway 99 and I-5 Sacramento and attacked without remorse.

How the killer approached is open to question, but the assailant unleashed a barrage of gunfire into their 4-door, light-blue 1983 Mercury, blowing out both front side windows, testimony to which, was the 15 small caliber shell casings scattered and retrieved from beside the vehicle. The couple suffered multiple shots to the head and were found sitting upright in the car by somebody described as a hitchhiker in the newspapers. Sacramento is situated approximately a one hour drive North-East from Vallejo CA and one hour and forty minutes due east of Lake Berryessa, and mentioned in two letters by the Zodiac Killer. Firstly, in the dubious Fairfield Letter postmarked December 16th 1969, it was claimed by the author he would go on to kill at least 38 more people, including three in Fairfield CA and nine in Sacramento. Fairfield is on a direct route from Vallejo through to Sacramento and within easy traveling distance for the Zodiac Killer, if indeed he was a resident of the Benicia, Vallejo or San Francisco area at the said time period.

More crucially though, the 1986 letter was relevant to the date and area where Koy Ien Saechao and Choy Fow Saelee were gunned down, having been mailed on Tuesday May 6th. The author of the 1986 letter stated that these latest victims were killed "about two weeks ago". Exactly two weeks prior to May 6th would have been April 22nd 1986, and the exact date of the cold-blooded murder of Koy Ien Saechao and Choy Fow Saelee.

The method of execution here is eerily familiar to that of the Lake Herman Road double murder of David Faraday and Betty Lou Jensen on December 20th 1968 and the Blue Rock Springs Park murder and attempted murder of Darlene Ferrin and Michael Mageau on July 4th 1969. All couples ambushed in their car, and although not substantiated, it seems likely the killer approached this couple from behind in his vehicle, due to the locality of the crime.

The most interesting aspect of the Laotian couples murder though, was that shortly afterwards a "Mystery" Man, thought to be a hitchhiker, flagged down a California Highway Patrol Officer in East Nicolaus and informed him of an automobile accident at the precise location the couple were eventually discovered. There are also newspaper reports suggesting the hitchhiker informed authorities in Marysville, Yuba County, that he had discovered the couple at approximately 6:30 am. Marysville, California is 37 miles north of the crime scene (by crow), but just over one mile from the murdered couple's residence in Dorman Avenue. He was later sought for questioning in connection to the double murder on Highway 99, but he failed to come forward and his identity remains unknown to this day.

Santa Cruz Sentinel, 24th April 1986
​The author of the 1986 Letter stated "I will give you a clue to help you with the mystry, They were killed by a freeway. The Blue Meannies almost caught me". Had the murderer already given the clue about his own identity to the California Highway Patrol Officer and he indeed was the 'Mystry' Man. Furthermore was the alluding of the "Blue Meannies almost caught me", as just another case of the Zodiac Killer toying with the long suffering police and authorities, that he seemingly enjoyed ridiculing during his long campaign of terror.

In fact the letter matches the crime almost perfectly. The author states "latest slaves", indicating more than one person was killed, they were killed "by Sacramento", they were killed "by a freeway", the date of the crime of "two weeks ago" was correct, the method of execution bore striking similarities to previous Zodiac crimes and the helpful "mystry" man, being a concerned citizen has never been identified.
A relative of Koy Ien Saechao and Choy Fow Saelee said "We don't want to get killed in the United States, we want to live here for freedom".
Let us hope one day they find a resolution to the answers they desperately yearn, and the killer, whomever they may be, finds that freedom will one day be no more.
​Follow up: http://www.zodiacciphers.com/zodiac-news/sacramento-cold-case-contact 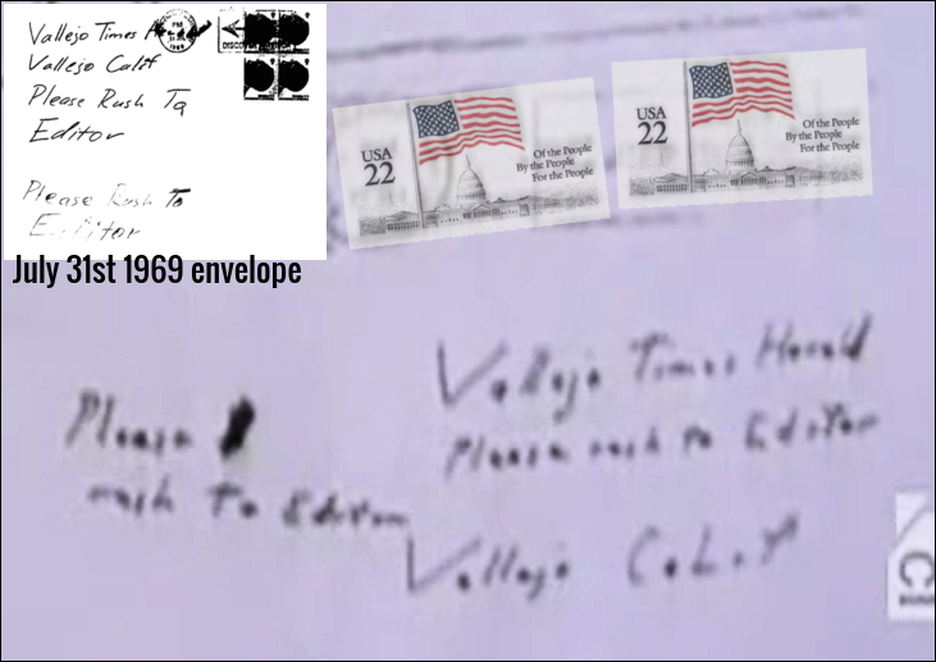