​​On July 13th 1971 a pasted card was mailed to the San Francisco Chronicle with the words "Near Monticello Shought Victims 21 ...... In The Woods Dies April".  Many have speculated on the location mentioned in the card as "Monticello" in Napa County, California, because of the Lake Berryessa attack on Bryan Hartnell and Cecelia Shepard on September 27th 1969. It has been further speculated on whether "April" was a woman's name or the month of the alleged murder. After a comprehensive review of all the information, I believe the woman's identity, labelled as victim number 21, can finally be revealed, along with the exact location of Monticello. 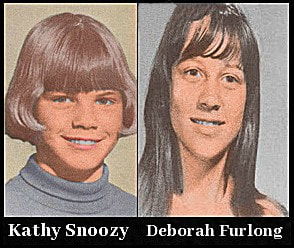 On November 8th 1969 the Zodiac mailed the 'Dripping Pen' card to the San Francisco Chronicle insinuating his involvement in the brutal stabbing of Deborah Gaye Furlong (14) and Kathy Ann Snoozy (15), who were found murdered on August 3rd 1969 in the Bay Area of San Jose, in what can only be described as a barrage of knife wounds. The inference of his chronological list of months on the card was suggesting there were two murders attributed to him in August. This crime was ultimately attributed to Karl Francis Werner.
On November 21st 1969 a letter and code from the alleged Zodiac was mailed to the San Jose Police Department threatening a widow. Police responded by implementing 24 hour surveillance on her residence.
Ten days later, on December 1st 1969, Elaine Davis (17), a Pleasant Hill High School senior disappeared from her 158 Pioneer Avenue home in Walnut Creek. The abductor had likely traveled through San Jose to dispose of her body at Light House Point in Santa Cruz.

On Sunday, April 11th 1971, Kathy Bilek (18) visited Villa Montalvo in Saratoga, having planned to read a paperback book (The Gabriel Hounds) and engage in a spot of bird watching​ in the seclusion of a remote, wooded portion of the park, near a small stream. Her body was found the next day by her father, Charles, while Santa Clara County Sheriff's deputies searched nearby. She had been stabbed 17 times in the back and 32 times in her chest and stomach, although her killer had taken care to avoid stabbing her breasts. Her murder was also attributed to Karl Francis Werner. Wikipedia. The brutal murder of Kathy Bilek would again be claimed by 'Zodiac', not only in the Monticello card, but in another alleged Zodiac letter, also mailed to the San Francisco Chronicle at about the same time as the Monticello card. Kathy Bilek was murdered in "April", exactly as mentioned in the Monticello card, and "in the woods" at Villa Montalvo (a wooded section of the park). Saratoga is a city in Santa Clara County, California, United States. It is located on the west side of the Santa Clara Valley, directly west of San Jose, The appearance of San Jose once again. ​ 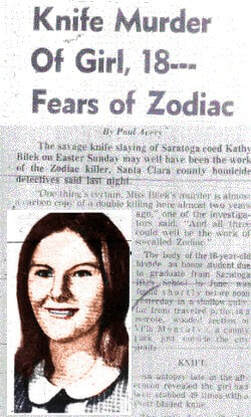 Kathy Bilek
If Zodiac created the Monticello card, the reason may have been  a response, albeit belated, to an article written by Paul Avery in the San Francisco Chronicle on April 13th 1971, suggesting a possible link between the murder of Kathy Bilek and the Bay Area murders. Karl Werner was charged with the murders of Snoozy, Furlong and Bilek over two months prior to the mailing of the Monticello card, but Zodiac was still insistent that he was the murderer of Kathy Bilek, as he had suggested with the Deborah Gaye Furlong and Kathie Ann Snoozy murders some 20 months earlier. The final thing to examine in the July 13th 1971 pasted card, were the words "near Monticello". It was easy to get sidelined into believing Monticello was referring to Napa County, because the town was completely covered by Lake Berryessa, the site of Zodiac's third attack.

"I killed Kathy Bilek near Monticello, in the Villa Montalvo woods in April".
"Near Monticello Shought Victims 21 ...... In The Woods Dies April".

​To view the proximity of Monticello to Villa Montalvo click here.

This wasn't the only communication to refer to the murder of Kathy Bilek.
Sometime in 1971, likely a few weeks after the mailing of the Monticello card, another Zodiac correspondence and cipher was received by the San Francisco Chronicle, postmarked Fairfield, California. The communication read:

I'll DO IT TO BECAUSE I DONE IT 21 TIMES. I CAN'T STOP BECAUSE EACH ThAT I KILL MAKES IT WORSE AND I MUST KILL MORE. MAN IS ThE MOST PRIZED GAME. ILL NERVER GIVE MY NAME BECAUSE YOU dONT UNDERSTAND. NEXT TIME I WILL SEND A PATCH OF HUMAN SKIN if their is SOME Left OVER.
The 148 character cipher decoded to
"Tis the Zodiac Speacking. Why can't you stop me. I can't stop killing. Stop listening t(o) phonys. If this is not on your front page in a week I will skin 3 little kids and make a suit from the skin".

The Monticello card stated "Shought victims 21", referring to the Kathy Bilek murder, whereas in this correspondence the author was claiming he had already "done it 21 times." The Monticello card was never released to the newspapers or public, so bearing in mind these two communications were both likely mailed at approximately the same time, there is a high probability they were mailed by the same author - or Zodiac himself.

Imagine the Zodiac Killer's dismay in late April of 1971, when his plans lay in tatters, upon the arrest of Karl Francis Werner for the April 11th 1971 murder of Kathy Bilek at Villa Montalvo in Saratoga, as well as the murders of Kathy Snoozy and Deborah Furlong in San Jose two years earlier, on August 3rd 1969. The Zodiac Killer would eventually be exposed as a fraud - caught in the act of claiming somebody else's victims at last. He reacted forthwith, by mailing two communications to the San Francisco Chronicle in the middle of 1971.

In the first, he was trying vainly to convince us that he was in fact the murderer of all three girls (Snoozy, Furlong and Bilek) and by extension claiming that Karl Francis Werner was the fraud or phony. Paul Avery, arch nemesis of Zodiac, wrote an article on April 30th 1971 detailing the capture of Werner. The newspaper article stated "He was immediately advised of his rights concerning any statements he may make and legal representation to which he is entitled, the detectives said. Werner was then taken to the scenes of the crimes. Late yesterday he was undergoing questioning. The detectives would not reveal what statements, if any, he had made concerning the killings of the three girls". The Zodiac Killer would respond in his decoded letter to the San Francisco Chronicle, warning the police "Tis the Zodiac Speacking. Why can't you stop me. I can't stop killing. Stop listening t(o) phonys. If this is not on your front page in a week I will skin 3 little kids and make a suit from the skin" (coded section).

The ​November 8th 1969 'Dripping Pen' card would not be the only communication insinuating his involvement in the murder of Deborah Gaye Furlong and Kathy Ann Snoozy, when the Monticello card arrived just over 20 months later, on July 13th 1971. The San Francisco Police Department had reason enough to place the Monticello card in 'suspected Zodiac correspondence' when searching for traces of DNA on potential Zodiac communications, so, from here on in I will refer to the Monticello card as though it was mailed from the Bay Area murderer to make things easier.

It is with little doubt that Karl Francis Werner was responsible for the murder of Deborah Furlong, Kathy Snoozy and Kathy Bilek in 1969 and 1971, but the overarching question is, why did the Zodiac Killer describe the location of Kathy Bilek's body as "near Monticello"? The neighborhood of Monticello is 9 miles east of Villa Montalvo. Why did the Zodiac Killer choose to pinpoint this particular location, rather than any other neighborhood in between Monticello and Villa Montalvo? He could have pasted "near Willow Glen", "near Oster", "near Carlton", or any other location closer than Monticello. It is arguable that he chose this particular location for a specific reason. 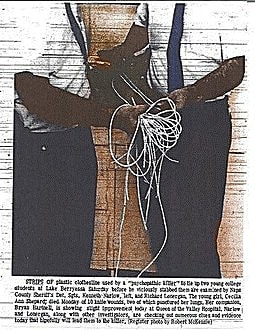 My first thought, was the Zodiac Killer was simply not going to make things easy, and had used Monticello to confuse people in the search for meaning behind the card. Having attacked Bryan Hartnell and Cecelia Shepard at Lake Berryessa (submerging the town of Monticello) on September 27th 1969, the possibility existed that the Zodiac Killer was attempting to divert the reader down this train of thought. However, something far more compelling came to light regarding the neighborhood of Monticello, not only that it was near the murder site of Kathy Bilek, but that it once again suggested his involvement in the murder of the two young girls on August 3rd 1969 in the Bay Area of San Jose.

The neighborhood of Monticello sits right next to the Oak Hill Funeral Home and Memorial Park, shown here. Here is an extract from the San Francisco Chronicle newspaper on August 6th 1969: "The other Furlong children are Glen, 16; Floyd, 12, and Pamela, 11. Furlong said he did not know and had not yet talked to Kathy's parents, Mr. and Mrs. Wilfred Snoozy. Both Snoozy, a carpet layer, and Mrs. Snoozy reportedly are in a state of collapse. Her funeral has been scheduled Friday at 11 a.m. at the Place Funeral Home in Los Gatos. Burial will be at Oak Wood Cemetery in Santa Cruz. Funeral services for Kathy will be held tomorrow (Thursday) at 2 p.m. at the Oak Hill Memorial Park Mortuary in San Jose. Burial will be at Oak Hill Memorial Park."

The funeral services and burial of Kathy Snoozy were held at Oak Hill Memorial Park at 300 Curtner Avenue, right next to the neighborhood of Monticello. This, in all probability, is why the Zodiac Killer chose "near Monticello" rather than any other location closer to Villa Montalvo. He was not only pinpointing this location to suggest he had a hand in the murder of the San Jose teenagers, but specifically chose the area by the gravesite of Kathy Snoozy because her forename was identical to that of Kathy Bilek. Not only was Kathy Bilek murdered in April, in the woods, near Monticello - but her name could be inferred in the Monticello card from the Oak Hill Memorial Park burial site of her namesake. The Pines card and '13 Hole' postcard were published in the newspapers, yet this card has always been withheld. What are the chances that the picture on the Monticello card contains sensitive material, deemed inappropriate for release by law enforcement, and may have something to do with Oak Hill Memorial Park.

The Pines card and Monticello card both contained similar wording, such as "pass lake Tahoe areas" and "near Monticello", as well as "around in the snow" and "in the woods". Harvey Hines, a retired detective from Groveland, believed that Donna Lass was likely buried on the Donner Ski Ranch. This area is extremely close to Donner Memorial State Park, as is Monticello to Oak Hill Memorial Park. Another uncanny connection in the murder of two innocent lives.

At about the same time as the Monticello card, in 1971, a questionable Zodiac correspondence and 148 character cipher was received by the San Francisco Chronicle, postmarked Fairfield, California. Bearing in mind Kathy Snoozy, Deborah Furlong and Kathy Bilek were all stabbed innumerable times, disfiguring their bodies, it is rather telling that the author of the 148 character cipher and letter should threaten 3 more young people like so: "Tis the Zodiac Speacking. Why can't you stop me. I can't stop killing. Stop listening t(o) phonys. If this is not on your front page in a week I will skin 3 little kids and make a suit from the skin" and "next time I will send a patch of human skin if there is some left over".
THE STORY OF SAN JOSE - ZODIAC