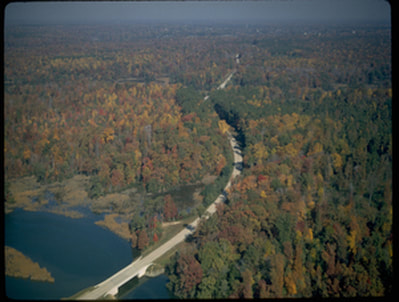 Situated in Virginia, the 23-mile stretch of Colonial Parkway is undoubtedly a place of natural beauty, but it harbors one of the darkest periods in Virginia's history, when a merciless killer stalked the three lane remote highway that stretches through the natural park between Yorktown and Jamestown. The roads turnouts were often frequented by couples seeking privacy, similar to the lovers lane areas of Lake Herman Road and Blue Rock Springs Park in the Zodiac killings, yet despite these serial killers being distinctly separate individuals, they were ultimately familiar with the areas they operated, suggesting each murderer may well have been local to the region.

It all began on October 12th 1986, when Cathleen Thomas (27) and Rebecca Ann Dowski (21), a lesbian couple, were parked up in their Honda Civic along Colonial Parkway, where it is believed somebody approached their vehicle. The speculation of how the perpetrator gained their trust is undetermined, but it has been suggested the killer may have been disguised as a park ranger or police officer to lure the unsuspecting couple from their car. Whatever the case, once the women had left the confines of the vehicle they were subjected to what can only be described as overkill, having received nylon ligature burns on their wrists and neck that indicated attempted strangulation, accompanied by having their throats slashed in a left to right motion and thereby surmised by police that the killer may well have been right-handed.

However, the couple were discovered by law enforcement inside their vehicle - and it appeared as though the killer had attempted to set the car on fire with diesel to destroy any incriminating evidence - but when this failed, it was pushed down an embankment towards the river where it caught up in the brush and was discovered three days later. It is believed Cathleen Thomas had struggled with her killer because a clump of her assailants hair, found in her hand, had been likely wrenched out as she fought for her life. There was no evidence of robbery or sexual assault, and it was determined the murderer may have been in his infancy, just starting out, due to the indecisive nature of his killing method, and so augmenting a real fear that this deranged killer may strike again. A fear that would unfortunately be realized just eleven months later.

By the south shore of the James River, Isle of Wight County on September 22nd 1987, David Knobling (20) and Robin Edwards (14) were to become the next victims of a deranged killer. This location near Smithfield, Virginia was approximately 20 miles due south of the first crime scene, and like the first victims, they had pulled their vehicle into a remote lovers lane turnout. When the car was ultimately discovered the windows had been rolled partially down, again suggesting that their assailant had approached under the guise of authority. Once the couple had been coaxed out of their vehicle, the killer marched them into the woods and callously executed them with a firearm.

Nearly seven months would elapse before murder once again resurfaced on April 9th 1988. Cassandra Lee Hailey (18) and Keith Call (20) were enjoying a first date together at the University Square of Newport News by the northern shore of the James River, after which they headed home together at approximately 1:30 am. It would be the last time they were seen alive. In an unusual set of circumstances, Keith's father was traveling to work the following day along Colonial Parkway, when he spotted Keith's car parked up on the highway - the driver side door was open and the keys were still in the ignition - but the couple were nowhere to be seen. Believing the couple may have ventured to the beach area, he did not report the sighting to police and continued on to work, however, things were to take a sinister turn later that day. A short time after Keith's father had left the scene a park ranger reported the vehicle abandoned and the police were summoned. During an inspection of the vehicle, the couple's clothes were discovered on the car seats, unusual, because as Keith's father would later specify, there were no clothes present within the vehicle earlier that day, A thorough search ensued, including the nearby river, fearing the couple may have gone swimming and drowned, but no trace of the couple would ever be found.

If indeed these murders were the work of one killer, it may have appeared that he had moved on or ceased, when a period of 18 months would elapse with no further incident. But that calm would be shattered on October 19th 1989, when two hunters would discover the decomposed remains of two young people, Annamaria Phelps (18) and Daniel Lauer (20). The bodies were discovered in the woods by a rest area in New Kent County, between Williamsburg and Richmond, but they had been reported missing 44 days earlier on September 5th 1989, shortly after they had headed out late at night on a 150-mile journey from Amelia County to Virginia Beach, having failed to reach their destination.

A short time later their car was discovered abandoned only 65 miles from their starting point, unusually facing west, and so conflicting with their journey to Virginia Beach, which would have facilitated an eastbound direction. Items within the vehicle appeared to have remained untouched apart from a single blanket that was missing. Their money had not been taken, which only served to increase the apprehension by police. Six weeks would go by before the harsh reality dawned. They were found a few miles from the rest stop on a logging trail, hidden in dense undergrowth, covered by the missing blanket. A forensic examination concluded the couple were likely killed elsewhere, probably back along the trail, with the killer having used the car to dispose of the bodies. Due to the advanced stages of decomposition, the method of murder in both instances was difficult to ascertain, but it was concluded that Daniel Lauer had suffered stab wounds to his body. Then the murders stopped,... or did they?

In the May of 1996, lesbian couple Julianne Williams (24) and Lollie Winans (26) were on a two-week camping break in Shenandoah National Park, west of Richmond, enjoying the wonderful scenery and each others company, when they were interrupted by a ruthless killer. On June 1st 1996 their bodies were discovered by park rangers near the Skyline Lodge, bound by the wrists, with their throats slashed in left to right fashion, reminiscent of the earlier murders of Cathleen Thomas and Rebecca Dowski along the Colonial Parkway. Again the elements of robbery and sexual assault were missing. The question remains, are these five cases interconnected, all being committed by a lone serial killer? Or possibly only the first and last in the series, or possibly none of them. Investigators and profilers remain divided on the Colonial Parkway murders, but the families are not - they just want justice. The Colonial Parkway Murders at the time of writing remain unsolved.