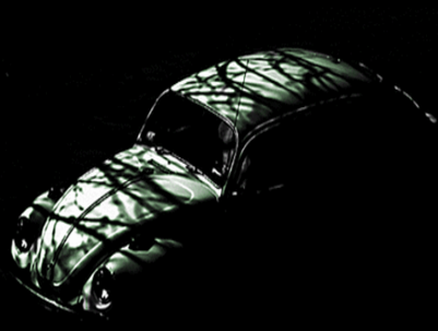 Cheri Jo Bates (18), born in Omaha, Nebraska on February 4th 1948, was murdered on Sunday October 30th 1966 in an alleyway beside the Riverside City College library, brutally attacked and killed as a result of a "severed right carotid artery due to laceration of neck due to probable knife" measuring a minimum of 3 1/2 inches long and one half inch wide. See autopsy report. The killer had sabotaged her Volkswagen Beetle car by ​tampering with the middle wire of her distributor with the intention of luring the young girl to her death.

Cheri Jo Bates was a gregarious, outgoing woman who easily made friends - and apparent by her desire to become an air stewardess where personality and social skills are key ingredients. This makes it even more strange that such a vivacious young woman, who by all accounts was in an amiable, humorous and sociable mood that day, could enter the Riverside College library shortly after opening time (6:00pm), check out three books from stocks and go unnoticed by virtually everybody in the cramped library annex, including her close friends who were present between 6:30 pm and 9:00 pm that evening. No testimony of the library attendees that night corroborate the widespread claims she left the library at its 9:00 pm closing time. Read more: Cheri Jo Bates.
Typed letters, addressed but unstamped were sent to the Riverside Homicide Detail and Riverside Press Enterprise on November 29th 1966 (see below). 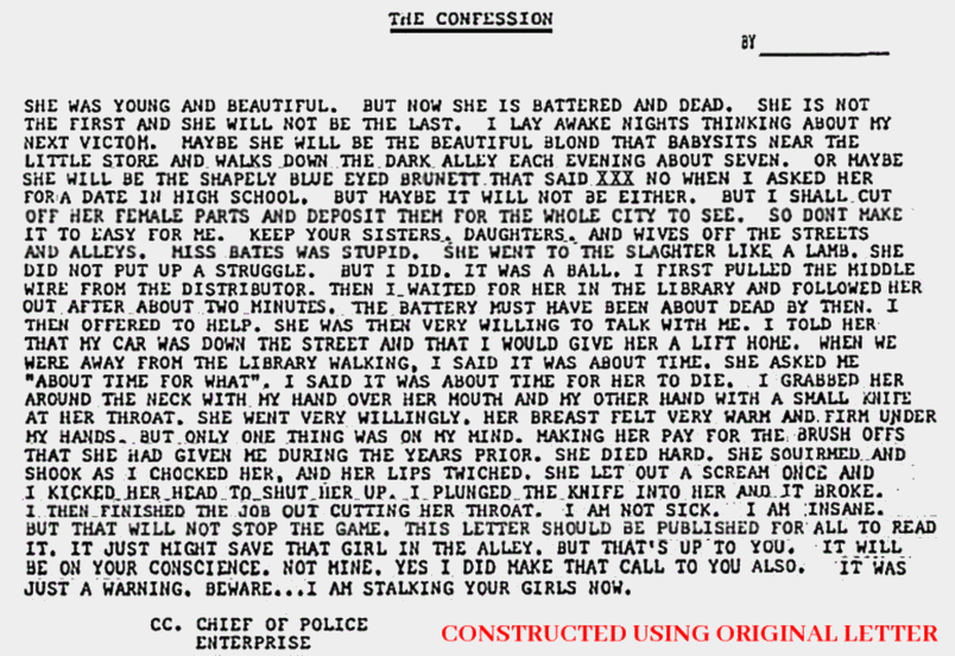 Transcribed version:
By _ _ _ _ _ _ _ _ _ _ _ _
She was young and beautiful. But now she is battered and dead. She is not the first and she will not be the last. I lay awake
nights thinking about my next victom. May'be she will be the beautiful blond that babysits near the little store and walks down the dark alley each evening about seven. Maybe she will be the shapely blue eyed brunett that said xxx no when I asked her for a date in high school. But maybe it will not be either. But I shall cut off her female parts and deposit them for the whole city to see. So dont make it to easy for me. Keep your sisters, daughters and wives off the streets and alleys. Miss Bates was stupid. She went to the slaghter like a lamb. She did not put up a struggle. But I did. It was a ball. I first pulled the middle wire from the distributor. Then I waited for her in the library and followed her out after about two minutes. The battery must have been about dead by then. I then offered to help. She was then very willing to talk to me. I told her that my car was down the street and that I would give her a lift home. When we were away from the library walking, I said it was about time. She asked me "about time for what". I said it was about time for her to die. I grabbed her around the neck with my hand over her mouth and my other hand with a small knife at her throat. She went very willingly. Her breast felt very warm and firm under my hands. But only one thing was on my mind. Making her pay for all the brush offs that she had given me during the years prior. She died hard. She squirmed and shook as I chocked her. And her lips twiched. She let out a scream once and I kicked her in the head to shut her up. I plunged the knife into her and it broke. I then finished the job out cutting her throat. I am not sick. I am insane. But that will not stop the game. This letter should be published for all to read it. It just might save that girl in the alley. But that's up to you. It will be on your conscience. Not mine. Yes I did make that call to you also. It was just a warning. Beware....I am stalking your girls now.
CC.
Chief of Police Enterprise.