​​Despite his need to reject the notion it was him on the Jim Dunbar Show, unfortunately he encrypted the message in a cryptogram that remained unbroken for fifty-one years. The caller to the Jim Dunbar Show has been identified as a hoaxer, but question marks remain over the original caller to the Oakland Police Department at approximately 2:00 am that morning. The Zodiac Killer denied being the caller to the TV show, but didn't clarify if he made the call to police. If you consider the possibility of Zodiac being the Oakland Police Department caller, your next question should be, why did the Zodiac Killer choose the Oakland PD above all others? 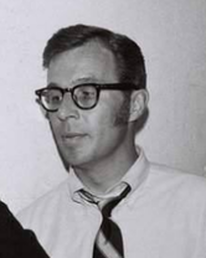 Jim Dunbar
In January of 1970, a person claiming to be Zodiac rang the Belli residence, spoke with his housekeeper Erna and requested to speak with the flamboyant lawyer, only to be told he was unavailable and out of the country. The caller replied "I can't wait, today's my birthday". This interaction was detailed in a partially redacted FBI file on January 14th 1970 (see below). The phone call would have been placed in the days before this urgent request, labeled "instant date January 14th". On February 18th 1970, the caller to the Jim Dunbar Show was identified by San Francisco Police as Eric Weill. They contacted the FBI with the details, but this information did not appear in the newspapers. Eric Weill was almost certainly the responsible for both the Jim Dunbar Show call and the call to Bellii's residence, stating "I can't wait, today's my birthday". Eric Weill was born on January 10th 1940 and his father's name was "Sam". But there is a strong possibility that the "birthday call" was placed on January 10th 1970, with Eric Weill likely believing, that being honest about his birthday would never lead to his identification. It didn't, but the resultant tracing of the calls to him and the FBI files detailing the "birthday call" just prior to January 14th 1970, further strengthening the case against him. The choice of "Sam" as his chosen name on the Jim Dunbar Show call may also be very close to home.

SAN FRANCISCO (UPI)- A troubled man who said he was the "Zodiac” slayer of five persons pleaded for help, complained of headaches and cried out “I’ve got to kill” during a two-hour series of bizarre conversations Wednesday on a television talk show. However, he failed to keep two surrender appointments with attorney Melvin Belli, who told the caller, “All of San Francisco wants to help you. The hand is out, you can feel the hands out.” There also was a challenge issued to Zodiac—from the brother of San Francisco cab driver Paul Stine. The cabbie was shot to death Oct. 11, and the killer mailed a piece of Stine’s bloodied shirt with a boastful letter to a newspaper. Stine’s brother, doe. 34, operator of a Modesto service station, issued an itinerary of his daily habits and challenged Zodiac to “come and get me..”.... “I don't carry weapons.” said the 165-pound Army and Air Force veteran. “I don’t feel I need any. I was very close to Paul, and now I want a chance at his killer.”

SAN FRANCISCO (UPI)- A man who said he was Northern California’s "Zodiac killer” of five persons talked with a San Francisco attorney by telephone today while television viewers listened .in. Attorney Melvin Belli also talked with the man on another, private line, then said he had arranged to meet with him. Police said they had no way of knowing whether the man was "Zodiac,” who has boasted in notes of five killings in the San Francisco Bay area in the last nine months. But they said they did not consider the caller a prankster. The caller first called a police station at 2 a.m. and said he wanted to get in touch with either Belli, the attorney w'ho once defended Jack Ruby in Dallas, or Boston lawyer F. Lee Bailey. He asked that one of them be on the morning talk show of disc jockey Jim Dunbar on KGO-TV. Police contacted Belli, who went to the studio. The man, who said his name was "Sam,” called shortly after 7 a.m and said he was the ‘‘Zodiac killer.” He hung up immediately, but called back a total of 12 more times. While Belli and Jim Dunbar, host of the show, pleaded with him to give himself up, the caller said he suffered from recurring headaches and impulses to kill. Finally, the caller agreed to have Belli go to the San Francisco district attorney’s office to see if prosecutors would assure him they would not ask for the death penalty. Belli said that in another call off camera, the man had agreed to meet him at a secret location after the conference with the district attorney.

SAN FRANCISCO (UP!)- A man claiming to be the Zodiac killer of five persons held another on-the-air conversation today with television personality Jim Dunbar. Two police inspectors closeted themselves with Dunbar at station KGOTV immediately after the one-sided conversation, which consisted mainly of Dunbar asking questions and repealing fragments of answers. “When headaches come on, you kill to get relief?” Dunbar asked at one point. “What other stuff you been on besides glue?” Last October 23, Dunbar and attorney Melvin Belli, a guest on his early morning talk show, held a bizarre conversation with a man who said he was Zodiac. Belli set a meeting with the man, who did not show up. Today's call interrupted an interview by Dunbar with a movie producer.
​
Police believe Zodiac is responsible for five killings in Northern California in the last 13 months. In a series of taunting cryptograms and letters to newspapers and police he has boasted of killing seven and threatened to kill more. Dunbar’s side of the conversation was recorded but not the other voice. The station said something had gone wrong with the monitor on the caller’s voice. The conversation ran, in part, like this: "What other stuff you been on besides glue? Oh, gas? flow do you get? Oh. Do you still have parts of the shirt you sent the newspaper? Oh. . , . Did the victim make a move on you? In other words, you thought he was going to move? .... Did you have the 9 mm gun? Oh, three guns. What, four guns? How could you conceal four guns?
‘‘When headaches come on, you kill to get relief? . . . Chief evil is what ? . . . Sonny Barger of Hell’s Angels?. Meridith Hunter—you are going to do it yourself to bring justice on the Meridith Hunter murderer? Oh. . . Were you anywhere near Altamont for the rock concert? Oh, you knew it was a hoax? . . . You weren’t there?. . . . “You hate Yellow Cabs? . . . Is that why you killed Paul Stine? . . . You want Belli to represent you? . . . You want life in prison, not death?. m m Why Friday 13th? Is that a bad day? ... You say you’re a tranquility smoker? ... Oh, for 10 years? How can you say that when you’re only 18? . . . What usually brings your headache on? You go without sleep? Months? .. . Are you gassed now? . . . Why do you mix booze with drugs? "Why don’t we get together before Friday 13th? ... You say southwest corner of the Tonga Room? You have a girl? Oh, two. Pretty young, you say, 21 and 24? . . . Tell me one thing you told Belli that I don't know, or wrote to him that nobody else knows. I won't repeat it.”